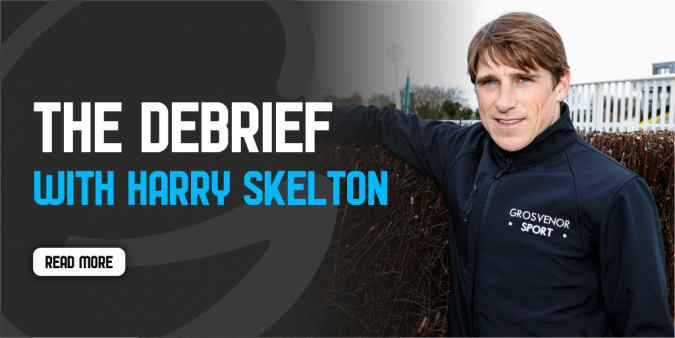 We probably just stepped River Legend too far up in trip. He travelled and jumped well until he weakened on the approach to the second last. The experience will have done him good and we’ll look to come back in trip for one more run before he goes for his summer holiday.

His owner, Frank McAleavy, kept the faith in Ashoka and it was great to get him back to winning ways. Obviously, he had dropped a lot in the handicap, but although he’s a 10-year-old now, he proved that he can still be competitive in the right races. He’ll be busy through the spring as he loves good ground.

We just can’t put our finger on what’s the matter with Calico at the moment. He’s been disappointing and we’re not sure why. He’s still only a six-year-old and it might just be that he isn’t strong enough yet and needs another year to develop. We’ll give him a bit of time now and come back next season. Hopefully the summer break will do him good.

Quiet Flow was too fresh up at Wetherby and he ran with the choke out early on. He hasn’t had much racing – he’s only been to the races three times and he’s six years old – so he doesn’t quite know what it’s all about yet. Once he’s got a bit more experience he should improve. We know he’s got ability, so we’ll just keep going with him.

You can put a line through Jet Plane’srun, as he’s been a busy horse this season and probably needs a holiday. He’s far better than he showed there. He’ll have a break now before going chasing next season and I’m sure he’ll win plenty of races over fences.

Hidden Heroics ran a great race but just bumped into a good horse on the day. He pulled a long way clear of the third, so it looks a good effort. We were happy with his run and I think he’s going to make a nice three-mile chaser in time. He hasn’t been too busy over the winter, so we might look for another race if the ground allows us to. I think he’s still improving, so he should be capable of being very competitive again next time.

Beakstown deserved his win, because as I said in some of my previous blogs, he’s bumped into a couple of really decent horses this season. He got his perfect conditions at Ayr – a big, galloping track, two-and-a-half-miles on good ground. He stuck to his task well and picked up again when he was challenged after the last, which was encouraging to see. I think he’s unlikely to be out again this season.

Get A Tonic won very nicely. She doesn’t do an awful lot once she’s in front as we saw at Doncaster the time before, but I was very impressed by the way she travelled through the race. We’re not sure whether she’ll be kept hurdling or go over fences next season, but that’s a discussion we’ll have over the summer. I don’t think she’s too far off being a Graded mare, and, as it’s only been her first season over hurdles this time, I feel she’s still got plenty of improvement to come.

Colonel Manderson was a bit unlucky to bump into a highly progressive rival. We were happy with his run as he kept galloping all the way up the straight and battled on well. He’s running consistently, which is nice to see, and we might look for another race for him.

Hatcher was running a nice race before coming down at the second last. I’m not sure how much he had left, but he would have been there or thereabouts. Unfortunately, he’s sustained a bit of an injury. We’re not sure how long that’s going to keep him out for yet, but hopefully he’s back on track before too long.

Considering it was a quick turnaround after Cheltenham, West Cork ran well in the Scottish Champion Hurdle. He could have done with a stronger gallop, as he got outsprinted by a fast-finishing filly that was obviously well-handicapped as she was seven pounds lower than when she finished second last year. West Cork has been fairly lightly-raced this season, so we might look for another race for him and will keep an eye on the Swinton at Haydock. We also have the possibility that he could go over a fence, ground allowing, in May.

Ashtown Lad just didn’t quite see out the trip in the Scottish National. He jumped and travelled really well, but his stamina just ran out from the fourth last. We’ll look to come back in trip in the autumn and there are going to be some nice races to win with this horse.

Our horses for Aintree are all looking good and we’re happy with them.

Protektorat seems in good form and it looks like we’re going to get quite a bit of rain, so that will be a help to him.

Allmankind feels as though he has turned a bit of a corner at home. We’ve changed things around with him and he seems really sharp and well.

It’s exciting having a runner in the National and we’re looking forward to running Blaklion. He’s an older horse now, but he loves it around Aintree and hopefully he can run well.

Aside from Aintree, I’ve got three rides at Southwell on Tuesday, where Stepney Causeway would probably be my best chance.