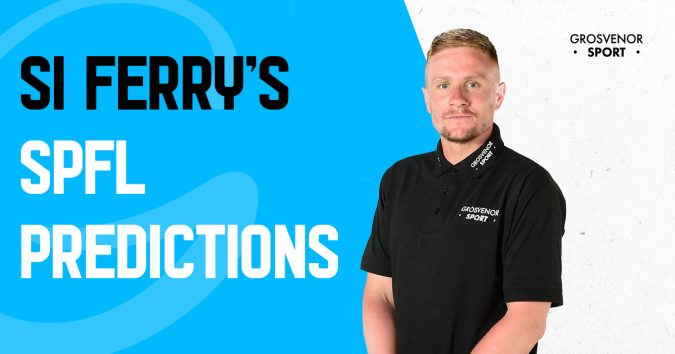 The Scottish Premiership is underway and it looks to be another thrilling title race, with last season’s eventual winners Celtic and runners-up Rangers both getting off to winning starts.

Open Goal star and Grosvenor Sport Football Ambassador Simon Ferry gave us his thoughts on where the title will be heading this season.

Celtic are already the team to beat and I think they’ll win the league. Aberdeen did very well to keep the score at 2-0 at the weekend. I think Ange Postecoglou is very clear on what he wants. He’s had a year in the job now and everyone can see his style – compared to the first game of last season it’s like night and day.

This season, Ange has got the squad that he wants and kept the core of his team whilst adding a couple that he wanted as well.

Rangers have lost their two best players in Calvin Bassey and Joe Aribo, but they have signed well. Tom Lawrence is a really good player but you never know how people will react to playing for Celtic and Rangers – they could be good players elsewhere but when you play in Scotland the pressure is completely different to anywhere else.

I would make Celtic favourites for the league purely because they’ve been able to keep hold of their best players.

Aberdeen will definitely be back in the top six again this season. A Jim Goodwin team is going to be well-organised and now they’ve added pace to the attack whilst also signing a striker for money, which doesn’t happen a lot outside of Celtic and Rangers.

Aberdeen struggled defensively last season and Goodwin has addressed that straight away. I can see why Anthony Stewart is captain and Liam Scales, for me, is a great signing.

The games I’ve seen already this season, Scales has been a stand-out player for me.

Jim has signed really well. They look more dynamic and have more movement in the middle of the pitch. The age of the squad is down. Jim knows the league inside-out and I think Aberdeen will be the team to challenge Hearts for third.

Hearts are a great team and Robbie Neilson has done a great job. But Celtic and Rangers are so strong and I don’t think it should be in Neilson’s remit to go and win a trophy. When you compare their squad with the top two it’s going to take one hell of a season for Hearts to win a trophy.

For me, Hearts finishing third and reaching another final would be another great season.

Knowing Derek McInnes, with the budget he’ll have compared to the other teams, I think he’ll be happy to survive relegation this season. If Kilmarnock can finish seventh it’ll be a really good season and if they reach the top six it’ll be an unbelievable season.

Derek won’t be getting too carried away and he won’t set any unrealistic goals. His main aim this year will be to stay in the league and then next season he’ll start to think about reaching the top six.

It wouldn’t surprise me if Killie did reach the top six because McInnes is a manager who has been so successful at Aberdeen and now obviously getting Kilmarnock promoted. He’s a manager who keeps his feet on the ground and I think a good season would be if they can stay in the league.

Aberdeen will be the surprise package this season. Dundee United will have a good season. Signing Dylan Levitt permanently is brilliant and also, for me, Steven Fletcher is one of the best signings of the summer. United have missed a focal point up-front and Steven Fletcher is that. It’s a great signing.

Aberdeen and Dundee United will both be challenging Hearts for third this year.