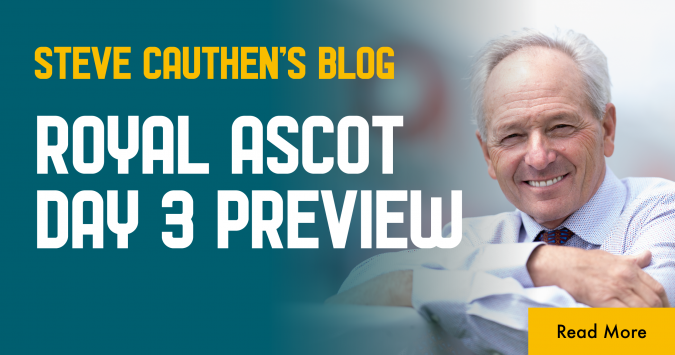 I was back at Ascot for the first time in 25 years on Tuesday and had a great time. I saw the new weighing room, which was incredible compared to what we used to have. In my day it was below the stands and was dark – sort of like going into a dungeon! Now it’s on a level with the parade ring and is much bigger and lighter. The new stand wasn’t there when I was riding either. It’s quite a spectacle, like being on a cruise ship.

It was great to catch up with old friends. I ran into Willie [Carson], who was always a good mate of mine when I was riding. He was looking nice and dapper in his top hat and tails, and like always he was giving me the needle!

When we were riding, he was usually trying to win the big races for Dick Hearn and at that stage I was going for the Jockeys’ Championship, but I do remember the time we had Old Vic and they had Nashwan – everyone we’d meet would be asking us who do you think is going to win if they clash. We used to wind each other up and say things like ‘on fast ground my horse would pick the other up and carry him’.

We had a good rivalry. He was a very good rider and was always one of the guys you had to beat out there. He rode for Dick Hearn who was kind of the number one trainer for the Queen, as he trained at West Ilsley, which was on her property, so I remember Willie riding a lot for the Queen.

Highlights of Day One

Baaeed was very impressive in the Queen Anne on Tuesday, but the highlight of the day was probably the Australian horse, Nature Strip, in the King’s Stand. A lot of people were saying ‘god, he looks like a jumper’ he was so big. You can see why he’s won about £10million over in Australia.

I think that’s what makes Ascot so special. The Australians race for huge prize money over there – they didn’t come over here for the prize money, but they did come over for the prestige. If you want to say we’ve got the best sprinter in the world, then you come to Ascot and beat everybody, and then you can actually say that.

They’ve got huge prize money in Australia, Japan, and America, but one would hope that Ascot would always be able to preserve the level of prestige it has. Although, I don’t know if that will always be the case. Obviously, the Queen has been a great supporter of racing for many years, but she isn’t going to be here for ever. Hopefully someone in the Royal family picks up her love of racing, because without that support it’s a big loss. Sheikh Mohammed isn’t going to be around for ever either, so there are going to be some changes. Horses will start going where the money is and then the prestige might be where the money is, eventually there may come a time when Ascot will have to compete on those terms.

But again, part of the prestige is to do with Ascot itself. It’s an amazing course, with an amazing history and there’s so much going for it.

The Coventry and Queen Mary are probably the top two colt and filly races for two-year-olds at Royal Ascot, so while this race might be slightly lower down the list, as with any race this week it’s difficult to win. Wesley Ward has had plenty of runners in this race in recent times, but he has clearly targeted different races this year and doesn’t have a runner.

The difference between sprint races in the States and over here is that in the US they break much more quickly from the gate, whereas European horses are usually given more time to find their stride. Ascot is certainly not like a flat, left-handed track in the States and the big, vast uphill stretch of the straight course is a challenge for any two-year-old. With that in mind, I think course experience is always an advantage, so Andrew Balding’s Bakeel, a winner over course and distance in April, is one that might be of interest.

Handicaps at Ascot are always difficult to win. I remember winning this race with Grand Pavois for Henry Cecil. When I was riding for Henry, he just let his horses run and they were given a handicap mark – he never tried to make sure they were well-handicapped. So Grand Pavois was probably carrying quite a bit of weight when he won.

You often get some horses from smaller yards that are carrying less weight but are quite nice horses, and they can end up being tough to beat.

A good horse like Grand Pavois was probably on the verge of being a Group Three performer, and that’s the sort of horse you need to win a handicap like this. Many in here could be potential Group class, but Israr might be the one for John & Thady Gosden.

I think everyone was hoping to see Emily Upjohn run here, but obviously John & Thady Gosden think this race comes too soon. I was at Epsom for the Oaks, and she looked very unlucky. It’s unfortunate she doesn’t run and get the chance to make up for that, but she looked to have a hard enough race there and I can’t say I’m that surprised.

Life Of Dreams finished behind Emily Upjohn in the Musidora Stakes at York, which I won a few times for Henry Cecil and also for Barry Hills. That tends to be a good trial for races like this, so the Godolphin filly might be the one to side with here. She’s only had two starts too, so should have lots of improvement to come.

The Gold Cup is a race with an amazing history and is the Group One that everyone at the meeting wants to win. When I was riding it was especially important for owner-breeders. I won the race in 1984 on Gildoran for Robert Sangster and then again in 1987 on Paean for Lord Howard de Walden. To those guys the Gold Cup was everything, but now it seems as though stamina isn’t as desired as far as stallions go.

It would be very special to see Stradivarius win a fourth Gold Cup, but it won’t be easy. Obviously, Aidan O’Brien’s got three in the race, and they are sure to be tough competitors. Aidan’s Yeats is still the record holder in the race with four wins, so it’s clearly a race he loves to win and I’m sure he will be aiming to protect Yeats’ record too.

There is always a big field in this race over the straight mile. The start is really cool as it’s down by the gates to the track where the Queen enters in her carriage at the start of each day.

The big issue in a race like this is where you are drawn. It’s very hard to dictate from the front, and it was certainly one of the times riding that I didn’t want to be in front. You have to have a really brave horse to be able to go from the front and last out to the line.

You want to be drawn near the good horses, so that they lead you far enough until you are a furlong or so out and then you can get home. When I was riding, I tried to judge the pace and then when it was time to go, I tried to nick a length out of everyone and then hoped to last home.

Whoputfiftyinyou and Koy Koy could be two to look at if you’re seeking a wager.

It looks like Reach For The Moon is in very good form. He ran a good second on reappearance at Sandown and should be able to build on that. The reception if he wins will certainly be the best of the week, I can’t imagine there’ll be anything louder!

This is one of the newer handicaps and wasn’t around when I was riding. It’s another big field event on the straight course, but over seven-furlongs rather than the Britannia trip of a mile.

That means it’s even more important to get a good position and track the right horses. Sometimes early on in a race like this the far side can be maybe 10 lengths ahead of the nearside. If you’re not behind the right horses, you have to go forward and make the running on your side or you end up so far behind.

When I was riding in a lot of the races on the straight track, the stand’s side tended to the best place to be, but it still varied a lot and it’s about where the pace is in the race.

You won’t find a much tougher race to pick the winner, but perhaps Vafortino, who has course form after winning the Victoria Cup last time, can take another step forward.