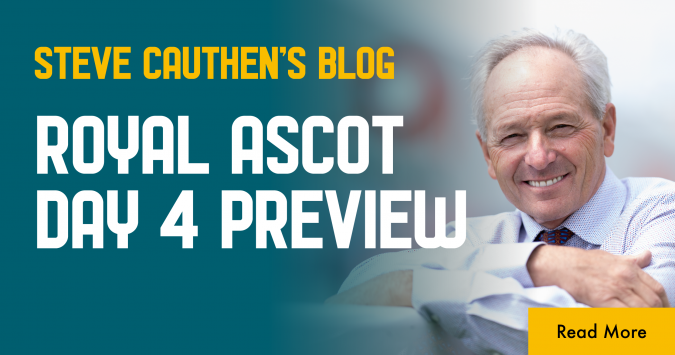 Being back at Ascot is almost like an endurance test – certainly for all the stable staff involved, the trainers and jockeys and also the spectators if you’re lucky enough to be here for the week!

I remember how it was when I was riding. Every year at Royal Ascot there was me and Pat [Eddery], Willie [Carson] and Lester [Piggott] trying to be leading rider at the meeting. Competition was fierce and everyone wanted to walk away on top. At the start of the meeting, you knew if you had some good rides, but you also knew they wouldn’t all win because it was so competitive.

We also had great battles for the Jockeys’ Championship. I won the championship three times. I had a long, drawn-out battle with Pat Eddery in 1987 and it went down right to the last day. I ended up winning by two, but it nearly killed me. During those years, if it was a good ride and even if I had to do a fairly light weight, I’d take it. Doing those light weights just wore me out. It took me a month to feel like a human being again at the end of the season, so I gave up on that and focused on riding good horses.

Back in America I’m still fully involved in racing. I breed, I race, I sell – I do all that. I have got eight brood mares at my stud in the US. I’ve had between five and ten off and on for a long time. I also manage the racing interests of a couple of the big farms – Three Chimneys and Dixiana Farm. What I’ve found since I’ve been back involved in the racing side is that you’re always talking to the trainers and the jockeys about the idiosyncrasies of horses by certain stallions. It helps you decide how you want to breed because you learn which sires produce genuine stock.

I look at this race and I see Mediate is by sire No Nay Never who was a Wesley Ward-trained horse. He was one of the first few horses that Wesley brought over to Royal Ascot and won the 2013 Norfolk Stakes. He was by Scat Daddy, which is why he ended up standing at Coolmore Stud.

He’s been a very successful sire and I think Wesley has kept an interest in him, so he has a few of them. His progeny tend to be good sprinter-miler type turf horses so a few US owners have come over here and bought some to take back too.

Bobby’s Kitten, the sire of Beautiful Eyes, is another US-bred sire, but he stands at Kirsten Rausing’s Lanwades Stud in Newmarket. She brought him over here and it’s another interesting line, as Kitten’s Joy [sire of Bobby’s Kitten] has been a leading turf sire in the US for years. He was a very nice racehorse and I suppose they are just trying to bring some of that blood over here.

It’ll be interesting to see how both do in the race.

When I was riding, I didn’t have a preference for either sprinters or stayers. In long distance you have a lot more time to try and judge the pace and try and dictate things or not. They are a little bit more for the thinking jockey. In sprints there are certain tactics that are important, but things happen so quickly. I rode a lot of good sprinters in my time, horses like Sharpo, Never So Bold and Keen Hunter, so I felt pretty adaptable to riding over different distances.

I saw Richard Fahey the other day at Epsom, and I know he’s had plenty of good horses in the past, such as Ribchester. He’s clearly a good trainer and a lot of people have said what a good horseman he is. Obviously, if you can win the Guineas or races like that, a good miler is probably more valuable than a good sprinter. Perfect Power looked to run a very good race to a point in the Guineas but probably didn’t stay and this drop back in trip could be what he needs.

Wouldn’t it be lovely for The Queen to have a winner with Just Fine?I’m sure everyone is longing to see her, and even if she’s not well enough to make it, it would be great for her to win a race.

I’d say any horse that The Queen owns, trainers will be thinking if there’s a race at Royal Ascot that they can compete in, that should be the target. I’m sure that Sir Michael Stoute, Ryan Moore and everyone involved with the horse is praying that he’s ready and can get the job done.

It would be a roar that nobody has heard in a while if Just Fine could win.

I won this on Chimes Of Freedom in 1990 for Henry Cecil. She was a lovely filly. She had won a Group One over in Ireland the season before and Henry brought her back for the Royal meeting. I remember she was in brilliant form and won well. I had a nice filly that I raced in the last couple of years called Palace Avenger, and she was the granddaughter of Chimes Of Freedom, which is sort of why I bought her. I probably wouldn’t even have bothered looking at her if I hadn’t spotted that. It’s what makes this game so interesting. She turned out to be a good fun filly, she was third in a Grade Two race and won about $250,000.

Inspiral is unbeaten and has looked impressive so far. This will be tough on the back of a break and at Royal Ascot no matter how good you, you can be sure that everyone is going to be coming at you. She might just have the class to overcome her rivals, though.

This was a race I never managed to win but was always another competitive handicap for the three-year-old fillies. As I’ve said before, finding a good early position in these big-runner fields on the Straight Course is crucial. You’d have to think Heredita has more to come after only three starts and she might be able to extend her unbeaten run.

Lanfranco in 1985, Bonhomie the following year and Private Tender in 1990 were my winners in this race, and all were trained by the genius that was Henry Cecil. Lanfranco was a very nice horse of Charles St George’s and we went into that race very confident. He had already run in the Derby and then he finished second behind Oh So Sharp in the St Leger. Bonhomie was a horse that looked like he could be really good, but I don’t think he did much after winning this.

A lot of it is having a horse that is right at the time, and for these horses, that maybe weren’t good enough for Epsom, this could be their Derby. Some horses are able to begin a stud career because they win a race like this, because it’s at Ascot. I like the look of the profile of Godolphin’s Ottoman Fleet here.

I’ve seen Wesley’s runner Ruthin run in the States. She’s by Ribchester and was probably bought by Stonestreet specially to run back at Royal Ascot. That’s how important this meeting is even to people in America. They want to be here and have competitive horses. Ruthin has got a lot of weight to carry with nine-stone-nine on her back, but she’s a high-class performer on her day and could run well.