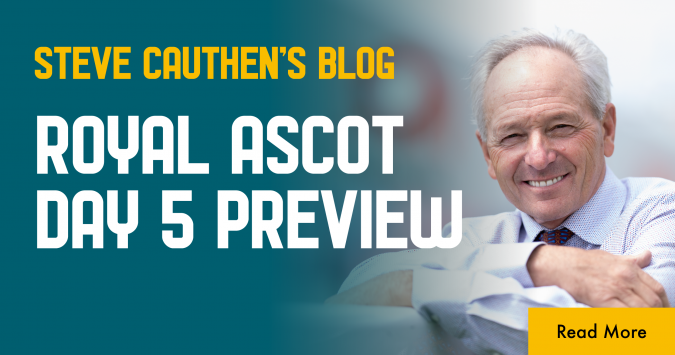 It’s just unfortunate the way the race was run, and I don’t think you can blame anybody.

Frankie [Dettori] was drawn in stall two, so he was right on the rail. He got Stradivarius settled and they all closed in around him, so he was stuck, and they were going no pace. Eventually he managed to work his way out and come wide, but he just couldn’t get there.

When the pace is slow and they all quicken up together like that they don’t split up, gaps just don’t appear. Looking at the replay, if he had stayed on the rail, it doesn’t look as though he would have got a split until too late. Stradivarius still ran a great race and I’m sure he will go on and win the Goodwood Cup and at least finish his career on a high note. He got a huge reception and it’s clear that the public love him. He’s certainly been a great horse for British racing.

You never know Kyprios might turn out to be the next Stradivarius.

Frankie is certainly having a rough time at the moment, and he was also out of luck on The Queen’s horse Reach For The Moon. No matter how good a jockey you are – and Frankie is one of the best that’s ever lived – you lose confidence in your decision making when things aren’t going well. You start thinking ‘did I go too soon, did I go too late, should I have stayed in or not’, things like that. But you should never really question your own judgement, it’s the worst thing to do.

I remember when I lost 110 races in a row in America. I know what it feels like to be on a bad run. You’ve just got to have faith and eventually it turns around. When you have a winner, the confidence builds and then you realise it wasn’t really anything you were doing wrong. Sometimes it’s almost like you snap your fingers and bang it’s all the other way, you’re winning three or four races a day.

Frankie’s the champ and I’m sure he’ll turn it around.

I remember when he was young and came over from Italy. He always wanted to learn, to ask me questions and other people he thought could help him. He also went over to America for a couple of winters, and I think that improved his style a lot and his knowledge of how things could be done. I’d say the way he rides is a mixture of European and American styles. He has his toe in the iron and is low and streamlined in the saddle. He doesn’t bounce up and down and move around too much, he’s always in rhythm with his horse.

When Ed’s [Chamberlain] running the show, you feel pretty confident that he’s going to throw you good questions, things that are going to be up your alley, but he’s also thinking about what the people want to hear, which is what makes the programme so good.

Hayley Turner was on with Jason Weaver as well as the many other people they move around to speak to. Brian Gleeson was reporting from the betting ring. He’s no doubt a character, but I guess you have to be if you’re trying to follow John McCririck!

The late great John McCririck at Royal Ascot in 2017

He was always there when I was riding, and he got more colourful as time went on! He was all about making things larger than life. Whenever there was a horse that was being backed, he used to call it ‘the flyer’. He was all about the excitement and trying to get people to see what was really going on behind the scenes. He was one of a kind.

I won this race in 1987 for Clive Brittain. I actually saw Clive up in Newmarket the other day and I think he’s 87 now but mentally he’s as sharp as a tack. When I was riding, he was the ‘early morning guy’ and I remember being up at his place at 4.30 in the morning to ride out. He had a lot of nice horses, and I rode Pebbles to win the Eclipse for him in 1985. Clive was always an optimist, nobody thought he could win the big races, but he kept expecting to and had plenty of success. He was always fun to be around because he was so upbeat. He used to pull a few dance moves when he had a big winner.

Aidan O’Brien and Ryan Moore had a two-year-old winner earlier in the week and I think it’s probably wise to watch the market in this race. Alfred Munnings is very short but if there’s support for him then it probably means he’s going to be tough to beat. I’m sure at Ballydoyle have a good line on all their juveniles. They would probably have run their best two-year-old in the Coventry, but maybe they felt six furlongs would have been a bit short for this horse.

Merlin’s Charm for Barry Hills, Midyan for Henry Cecil and Satin Flower for John Gosden were my winners in this race. The Jersey is usually a really good, competitive race. These tend to be horses that are talented but might be seven-furlong specialists. The unbeaten Monaadah runs in the Shadwell colours but is trained by Saeed bin Suroor, who usually trains exclusively for Godolphin. I don’t know how it came about but the thing is that Godolphin was not only formed by Sheikh Mohammed’s horses but also by Sheikh Hamdan’s as well. Sheikh Hamdan was one of the best breeders there have been. He loved his horses. He followed everything very closely and it was a big part of his life. He’s certainly a huge loss to racing.

Usually in America when you make your comeback you don’t start off in a Group One, but it’s more doable here, and with big racing strings trainers can get their horses fit first time out. Having had a run would probably give bettors more confidence, but Charlie Appleby wouldn’t be running him in a race like this at Ascot if he didn’t feel he was ready. I’d say that Hurricane Lane will be fit and ready to do his best.

This is a huge field for a Group One, and it’s a serious race. I’m hoping for a change of luck for Wesley Ward and Irad Ortiz. Things haven’t gone their way so far this week and they’ve been unfortunate, but that’s racing. I think it’s good for Wesley to have success here because it makes other US trainers think about giving it a try, which is obviously what makes Ascot what it is. Hopefully they can get off the mark with Campanelle and she looks a good price too. Obviously, Home Affairs could be hard to beat, and their team have a good line on this race after winning the King’s Stand with Nature Strip. I see Campanelle is drawn near the favourite which will be interesting.

Campanelle winning the Queen Mary Stakes at Royal Ascot in 2020

I always found this a tough race to figure out when I was riding. Fresh was a close second in this one last year and he looks to have a good chance again.

This is one of the newer races. It looks tough with such a big field on the round course and finding a good position early on will be key. Godolphin don’t usually try to get their horses well-handicapped, but they have such a lot of quality that often they have strong chances in these types of races. They’ve got four in here and perhaps Honiton can help Frankie get back into the winners’ enclosure from a decent looking draw in stall seven.

This is a real marathon of a race, and I think the longest Flat race in Britain. It just goes to show the variety of races on offer at Ascot. As I remember when I won on Overdrive in 1988, and she stayed well. At two-and-a-half mile’s stamina is going to be a factor no matter what pace they go. At all times you’re trying to run the race at the pace to suit your horse. Falcon Eight has won races over hurdles in the past and as long as the ground remains quick, he’d be the one I’d side with.