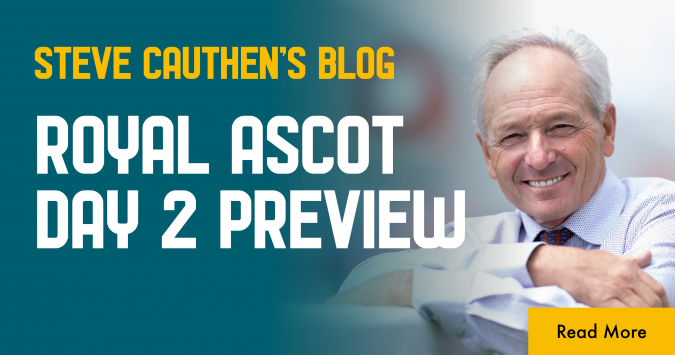 Steve Cauthen is a former American jockey who became the youngest rider to win the American Triple Crown in 1978. He came to the UK a year later, beginning associations first with trainer Barry Hills and later Sir Henry Cecil. In a 13-year spell he took British racing by storm, winning all the British Classics as well as 36 races at Royal Ascot before his return to Kentucky in 1992.

This week he will be back at Royal Ascot for the first time in 25 years. In this blog he recalls his experience of riding there and looks ahead to Wednesday’s racing.

I won the Queen Mary for the first time on Gwydion for Henry Cecil in 1985 and then for David Elsworth with Dead Certain in 1989. She turned out to be a nice filly, but unfortunately, I didn’t get to ride her all the time. Cash Asmussen won the big race at Newmarket on her, the Cheveley Park.

I rode for David [Elsworth] as much as I could – I was sort of his first choice when he could get me – but of course I was always riding for Barry [Hills] first and then Henry [Cecil]. Sometimes I’d ride horses and then I couldn’t stick with them.

David was a unique trainer; he was just a mad genius. He had his own way of doing things and sometimes he couldn’t exactly explain why he was doing it, he’d say ‘I know what I’m doing, I’ll take care of the training, you take care of the riding.’

He trained near Salisbury when I was here, and it was just a lovely place. He had a good crew of people and trained many good horses, both Flat and Jumps. I think he specialised mainly in Flat horses, but of course trained jumpers like Desert Orchid – an amazing horse.

Races at Keenland are usually pretty competitive, so for Love Reigns to win by nearly 10 lengths on debut suggests she’s useful.

Owners Stonestreet Stables are a big farm in the States and one of their major clients is Barbara Banke [the Californian wine mogul]. They come over to the UK and Ireland to buy horses with the intention of bringing them back to race at Royal Ascot. Horses like Campanelle, who races in the same colours, were bought over here. I’m sure Love Reigns is one of their biggest chances of the week.

He’d have a lot of stayers that weren’t quite top notch and he’d aim something at this race most years. They would be the ones that he knew weren’t good enough for the Derby – weren’t quick enough or wouldn’t handle Epsom. If they had run in a few trials earlier in the season but he knew they weren’t quite good enough he’d say, ‘we’ll keep that for Ascot’.

I was at Epsom for the Derby and saw Nahanni run. It’s kind of quick coming back from the Derby, but this is a horse that they obviously felt didn’t quite get there at Epsom. He might have needed a bit more distance to show his best or lost a bit of ground running down the hill. This galloping track at Ascot could be right up his alley and William Buick is riding so he looks to have a strong chance.

Nahanni ridden by William Buick, on their way to winning the Blue Riband Trial during the Epsom Downs Spring Meeting

I don’t think this was a Group One when I won it back in 1982 [on Kind Of Hush trained by Barry Hills], it was a Group Two back then. Obviously, they change these races based on who continues to win them and good horses have won it, so it’s got Group One status, which is cool.

I remember winning on Stage Craft in 1991 for Michael Stoute. I didn’t ride that often for Michael, until my last couple of years when I was riding everything for Sheikh Mohammed. This was one of the nice horses that he had, he was a very nice little colt and he won well as I remember.

I came and rode work occasionally for Michael, but I wasn’t really around all the time. I obviously knew that he very much took his time with his horses – you could see the races where they would run or where he wouldn’t run them as he was just being very patient with them.

I’m sure he has taken the same approach with Bay Bridge, and he will probably be very difficult to beat with Ryan Moore in the saddle.

Japan have been winning many big international races recently and must have a chance with Shahryar. When the Japanese get on to something they are amazingly good at following through with it. I went over and rode in Japan in 1980 and the level of the horses and the level of jockeyship was pretty average to say the least. They’ve just dramatically improved, with their bloodstock and training methods. The level of jockeyship has improved hundredfold – now they’ve got good, stylish jockeys that ride nice races.

I was invited to go over to Japan and every day they would debrief me – why I did this, why I did that. Then all the young jockeys would come out and ask questions. Top jockeys go over there now and probably sharing their ideas is still part of their riding deal. Japanese riders absorb all these ideas and that’s how they get better.

This race wasn’t around when I was riding, but it looks another good contest for the older fillies and mares. Some fillies look like colts and act like colts, you have to get hold of them to make them go. At this level though most of them are just pretty high-quality.

Mother Earth has been around a bit, after running in the Breeders’ Cup Mile and then going to Hong Kong. She must be a tough filly and should have a fair chance.

I remember Jane [Chapple-Hyam] from when I was riding for Robert. It’s nice to see her doing so well as a trainer, and good that we see lots of women doing well in the sport and that racing is open to all.

This is such a hard race to figure out. It’s a race that people prepare horses for and is one of the big handicaps that everyone wants to win. Often lots of the owners are trying to lay out one of their horses for it and land a good bet as well.

If I was on one that I knew had a good chance, I wouldn’t give out too much information, but I’d tell my mates in the weighing room. I wouldn’t tell them exactly what I was planning to do – it was all a game of cat and mouse and sometimes giving out too much information could cost you. But I would tell them most of what I was planning, especially if I thought I could beat them!

Legend Of Dubai looks as though he hasn’t finished improving.

Another difficult race, as a lot of these horses have only run once. When I was riding, many of the horses I wouldn’t have seen run and it was difficult to keep tabs on all the form.

It’s probably best to stick to horses trained by Aidan O’Brien, Andrew Balding or even Wesley [Ward]. Seismic Spirit was only second on debut, but they obviously feel that he’s on the improve and that five furlongs uphill is going to suit him.

This was the first race that Wesley won at Ascot in 2009, so he knows what it takes to train one for the race.

Carrying lighter weights can make a big difference up the Ascot hill and it’s probably best to look to those less exposed horses. Obviously when I was riding, I would only ride the more exposed horses because they were the only ones, I could do the weight on! At the end of my career eight-eight was probably bottom weight for me.

That would have meant I could just have done the weight on Haziya though. I tend to think that someone like Joseph O’Brien wouldn’t bring a horse here if he didn’t think it had a good chance of winning.