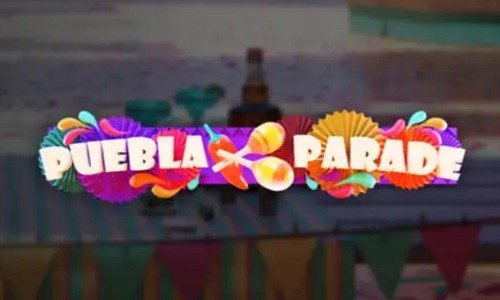 Ready your dance moves because we’re spending the whole day dancing in Puebla Parade slot! Play’n GO takes us back to the 1860s in Mexico when Cinco de Mayo was commemorated after their win at the Battle of Puebla. The game is inspired by the Mexican culture’s festive symbology from the graphics, visuals, and soundtracks. Its expanding reels and pay lines come with average payouts and high volatility.

Puebla Parade starts with a default 5×4 grid layout that expands with up to 7 rows as you progress in the game. It doesn’t have a lot of features so its gameplay is focused on the Wild symbols, Respins, and Bonus Spins.

This slot doesn’t have a Bonus or Scatter symbol but it has 2 Wild symbols that parade on the reels. Thus, it is up to the Wild symbols to turn up the heat in Puebla Parade. These special symbols appear as the Señor Wild and Señorita Wild characters in their traditional colorful Mexican clothes. The Señor and Señorita Wild symbols substitute for any paying symbol to help you form more winning combinations on pay lines.

These Wild symbols also appear anywhere to make their winning cluster and give the same prize. But if you land both the Señor and Señorita Wild symbols on the same spin, the pair are locked on the grid. These locked Wild symbols turn into Walking Wilds.

If the Señor and Señorita Wild symbols joined forces during the Respins, the 2 symbols create a pair of dancers. This is called the Pareja Wild symbol that shows the couple as a single symbol. Once created, the Pareja Wild symbol comes with a 2x Multiplier value. This symbol also increases the height of the reels by 1+ with up to a maximum of 7 rows.

The Walking Wilds continue to move into a new position on each Bonus Spin. Even the upgraded reel height you achieved during the Respins feature is called into the Bonus Spins round.

This game is played with 421 pay lines where winning combinations are formed with 3 or more matching symbols on adjacent reels. All winnings are also paid from left to right after a minimum bet of £0.05 up to a maximum of £100.  Expect some dry spins sometimes since Puebla Parade has high volatility with a 7/10 rating.

This leads to the maximum win of 5,000x the stake on each spin. Its low-paying symbols consist of the Royal symbols 9, 10, J, K, Q, and A that are worth 0.6x for 5 matching symbols. Meanwhile, its high-paying symbols consist of Mexican-inspired symbols like the Tortilla Dip, Taco, Guitar, Piñata, and Skull. These symbols are worth 0.8x to 4x while the Señor and Señorita Wild symbols are worth 4x the stake for matching 5 symbols.

Puebla Parade slot reminds us of another NetEnt slot “The Invisible Man” where the Walking Wild occurs as one of the main highlights. Its interesting features catch the players’ interest especially if you’re into clashing symbols that create more actions and better rewards. Most importantly, Puebla Parade has a decent betting range and payouts.

What´s the volatility in Puebla Parade?